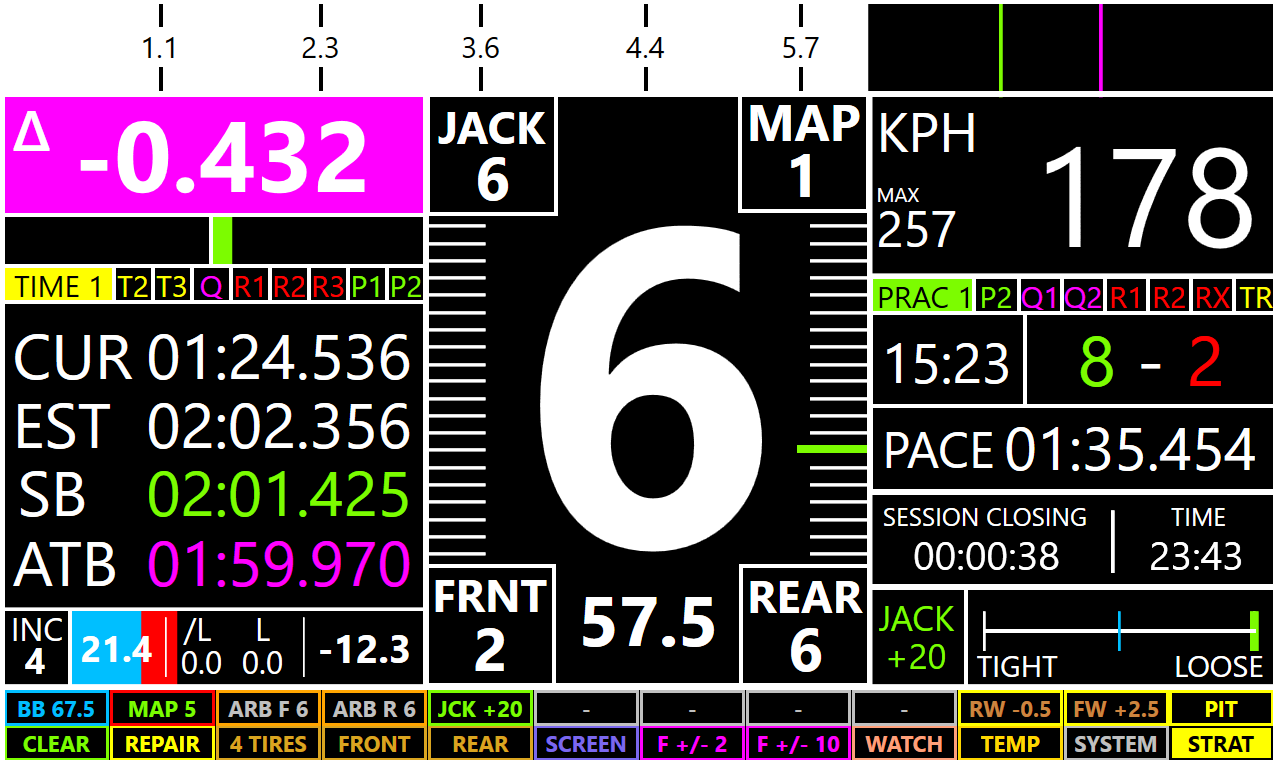 My collection of new and enhanced iRacing properties, used to build the most feature specced dashboard for iRacing available. Includes detailed LED animations for every car, based on arduino and WS2812 LEDs.

A whole bunch of manual mapping is required for every track/car. As well as design and LED programming for each car. Currently not a lot of fully supported tracks, but more tracks and cars will follow. I think I'll spend about 2-5 hours for a car and 2 hours for a track (all configurations). For unsupported cars, the dash and properties will work OK, the majority of features still working optimally. For unsupported tracks, completely fine. The major concern with unsupported tracks is pit drive through and tire change timings, which probably is a bit off.

All is for free, even drawings and PCB schematics for my wheel and dash projects. Feel free to donate if you find this stuff useful, or if you want to push support for certain tracks/cars.

Dashboard:
- Fixed dependency on Romainrobs iRacingExtraProperties, causing a slowdown warning to appear all the time for anyone not having his plugin.
- Fixed some cosmetic issues

Hello! First of all thank for your amazing dashboard, i love it

I would like to ask if its normal that with the latest vesion, regarding the TCR cars, the botton pit lane bar its hidden under the brake/throttle bar. The assigned buttons to control the botton pit lane menu works but the menu isnt  showed. Is this some sort of bug? In other cars like the skippy or the ferrari evo it works well

@macius Cars that aren't officially supported I have set to only have the brake/throttle. However, I cant think of a good reason for this. The pit menu functions will work without the car being supported. I've changed it now, so that the single-line pit menu is default for unsupported cars. Break/throttle only used for tracks without pit lane. Download the .dll again:)

@andreasdahl thank you very much for the response and the update!

Another thing that I forgot to mention is the track temperature. Not sure if it’s bugged but the track temp seems very high like 40 C while the air one is correctly showed, like 26 matching the provided by the sim.

Have you ever consider to include info like Sof of the race and irating gain in the dash? Maybe under some pit menu setting ? It’s the only thing I miss for your amazing dash!

This post was modified 10 months ago by Macius
ReplyQuote

@macius I'll have a look at the track temp values, but in general track temp is higher than air temp, and often 10+ degrees higher. SoF and iRating change is a great idea. I was planning on implementing this at some point, someone else suggested it, but it must have fallen off my list. Ill find a place for it in the next update 🙂

Yeah the track temperature is higher normally, but for example yesterday in a race session it was air 26 track 29 and the air one was showing ok, but the track displayed 40 in the dash. So strange. I tested the temps in the Romainrobs iracing universal dash and there were ok displayed in the dash.

Thank you very much for the quick responses. Very excited to see further updates

Wow, so quick! Thanks for the update. You rock!